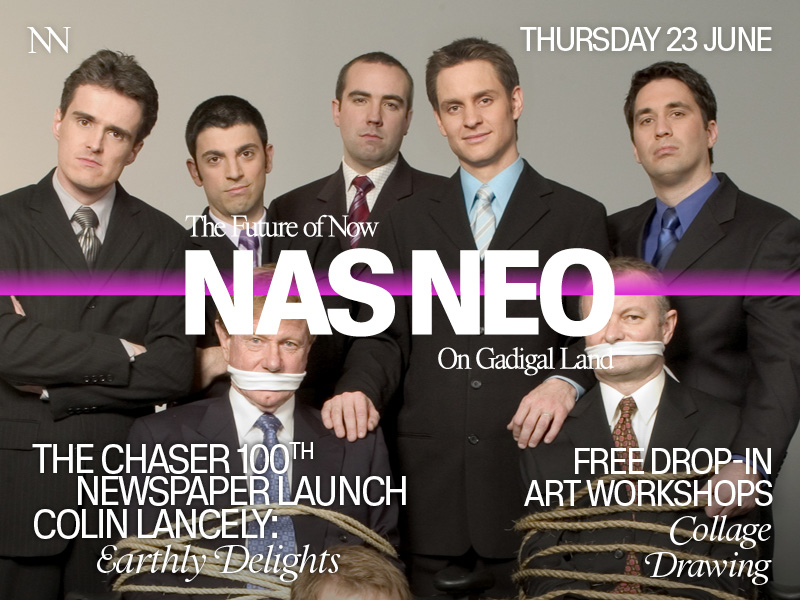 NAS NEO THE FUTURE OF NOW ON GADIGAL LAND THURSDAY 23

The Chaser to publish 100th Issue of its newspaper

Comedy group is going back to its root: “We were right, the internet was just a fad”

Craig Reucassel, Chris Taylor, Chas Licciardello, Andrew Hansen, Charles Firth, Dom Knight and Julian Morrow will speak at the event, including a presentation about the shady business dealings of the sprawling Chaser Media Empire, a behind-the-scenes look at the creative process of writing for an out-of-date medium like print, and then a Drunk Q&A session, where audience members can disguise long boring thoughts as “questions to the panel”.

The night will end with an all-new original song from Andrew Hansen, written especially for the occasion.

The night will be themed as “The Museum of Chaser”, and will feature large prints of all of the Chaser’s most offensive and disgraceful front covers. “This is a night not to be missed,” said Charles Firth, “although I won’t be coming because the finals of Britain’s Got Talent is on that night on Channel 7 and I really want to see who wins. But otherwise I’d totally be there.”