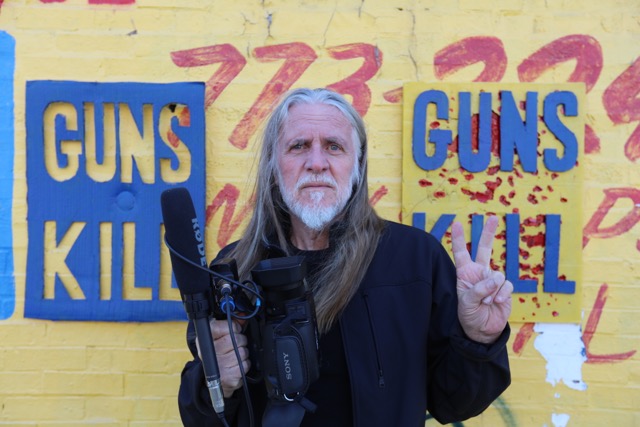 Dr George Gittoes AM is a major Australian artist, photographer and filmmaker. For nearly four decades he has documented some of the world’s most notorious conflicts. From the killing fields of Bosnia to the brutal massacres of Rwanda, Gittoes has documented the best and worst of the human condition. In Crossing the Lines, he speaks of his experiences of art and war.

Gittoes’ work typically reflects his social, political and humanitarian observations of man’s treatment of his fellow man. He has been described variously as a pop artist, a figurative artist, a modernist and a post-modernist. Ultimately he is a documenter. Through drawing, painting, film making and the written and spoken word, he reflects and tells the stories of what he has seen and experienced. Acclaimed as one of Australia’s most important artists, his works have been collected by MoMA NY and MFA Houston, Texas;  National Gallery of Australia; Queensland Art Gallery; Museum and Art Gallery of the Northern Territory; Museum of Applied Arts and Sciences (MAAS) as well as numerous regional galleries.

Gittoes was awarded the Sydney Peace Prize in 2015 in recognition of his life’s work in contributing to the peace making process.  He was awarded the Bassel Shehade Award for Social Justice at Syracuse University, NY in 2013, and won the Blake Prize for religious art for one of his most important paintings The Preacher.  He is represented by Nanda / Hobbs in Sydney and Mitchell Fine Art in Brisbane.