The Australian: No fan of the royals 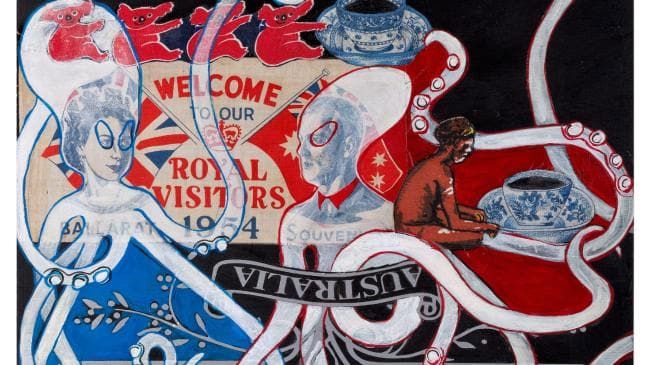 The Australian: No fan of the royals

Karla Dickens had not been born when the Queen visited Australia in 1954, but such was her interest in the monarchy that 60 years after that royal tour she decided to create four artworks and a poem based on the visit. Dickens’s works, all titled Bottom feeder, allude to the English monarchy spreading what Dickens describes as its “sucking tentacles” around the world:

Dickens is a Wiradjuri artist who trained at Sydney’s National Art School and is now based in Lismore in regional NSW. In 2016, her images, along with those of other indigenous artists, lit up the sails of Sydney’s Opera House. She had little money for paint while at art school, so she turned to collage art. She would pick up discarded items on the way to classes and source materials from op shops and the local tip.