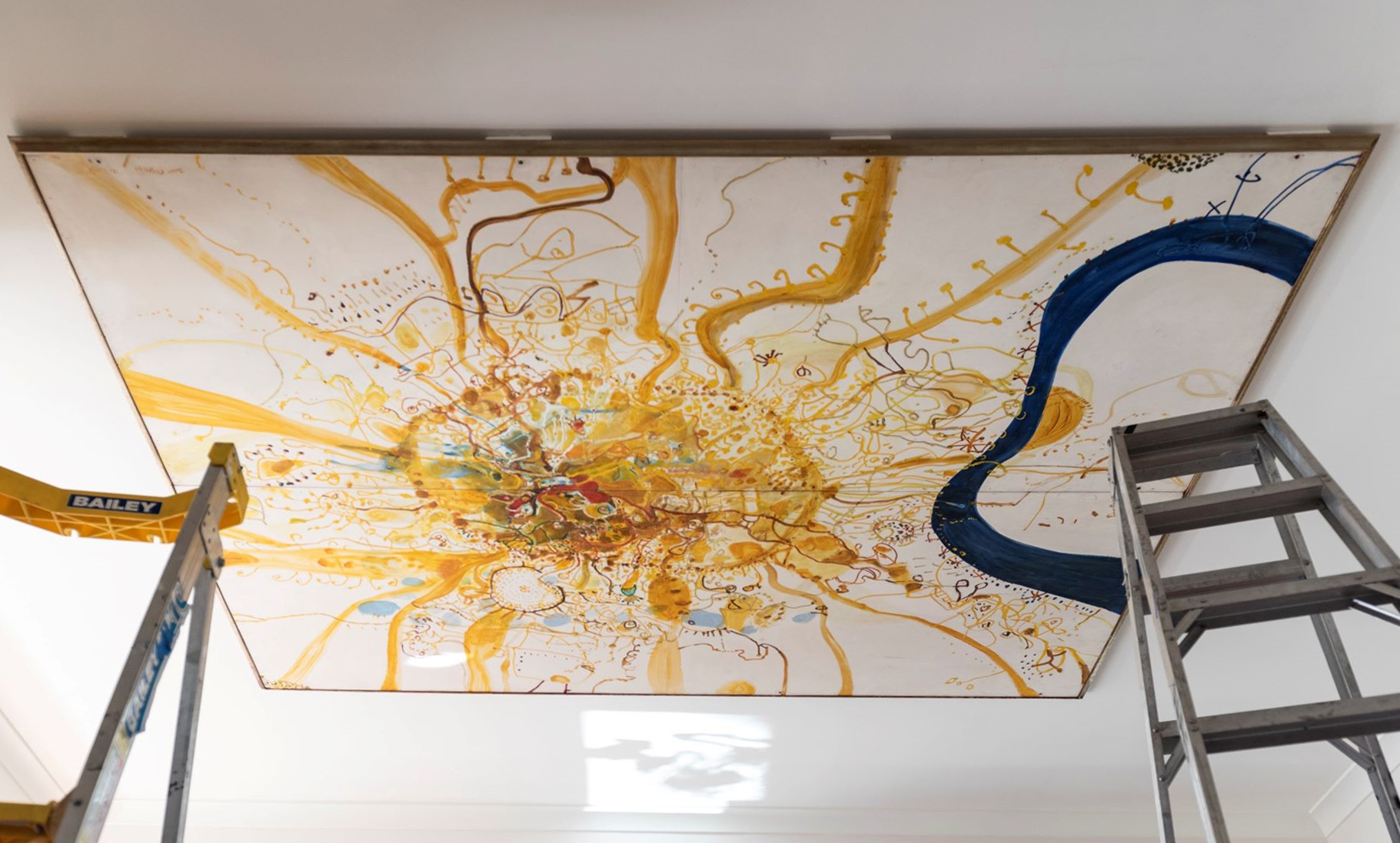 Le Soleil is a large ceiling painting, about two by three metres, created by John Olsen in 1965 as a commission for a private owner. It was first exhibited at Clune Galleries in Sydney, 22 April⁠–⁠08 May in 1965. When it was installed on the ceiling of the owner’s family home, Olsen added some finishing touches on site, including the handprint of one of the daughters of the house. The painting was originally hung on a blue background; later it was moved to a neighbouring house, where it has been displayed on a white ceiling for about 15 years.

Since it was first exhibited in 1965, the work has only been seen in public once, in a show of Australian art in London in the 1970s.

Tracking down Le Soleil was the work of Kylie Norton, who is compiling John Olsen’s catalogue raisonné, a record of every work he has ever created. She knew of the painting, but not who owned it or where it was. During her research, she spotted a section of the painting in an old newspaper story about the family, then used ancestry.com.au and council records to track down a phone number, which she texted. She received a reply and an invitation to come and see the work, which it turned out was quite close to where she lived.

Le Soleil has remained with the same family since it was commissioned, one of the few ceiling paintings by Olsen in a private collection. The family agreed to show the work as part of the John Olsen: Goya’s Dog exhibition at the NAS Gallery, the first time it has been seen in public in Australia since 1965.

In a review that year, Sydney critic, painter and poet James Gleeson wrote: “It is particularly heartening to encounter a first-rate contemporary whose work glows and blooms with an uninhibited acceptance of life. Such an artist is John Olsen, and his exhibition at the Terry Clune Galleries is an occasion for praise and thanksgiving. He makes no bones about being glad to be alive. His paintings sing and shout and exult in the joy of living. For him it is enough simply to see and hear and taste and touch and smell. He drinks everything in through all his senses …

“Olsen is still in his late thirties. He is still what one would call a ‘young’ artist. Undoubtedly his work will change as he grows older. It is significant that the latest of his painted ceilings, Le Soleil, is not only his finest work to date but shows him moving towards a new understanding of the nature and potentialities of his talent. As a ceiling it is certainly the most successful he has yet accomplished. One day, it is to be hoped, Olsen will have the chance to paint a large ceiling in some great public building. If Le Soleil is any guarantee, it could very well turn out to be one of the really great significant works of our time.” 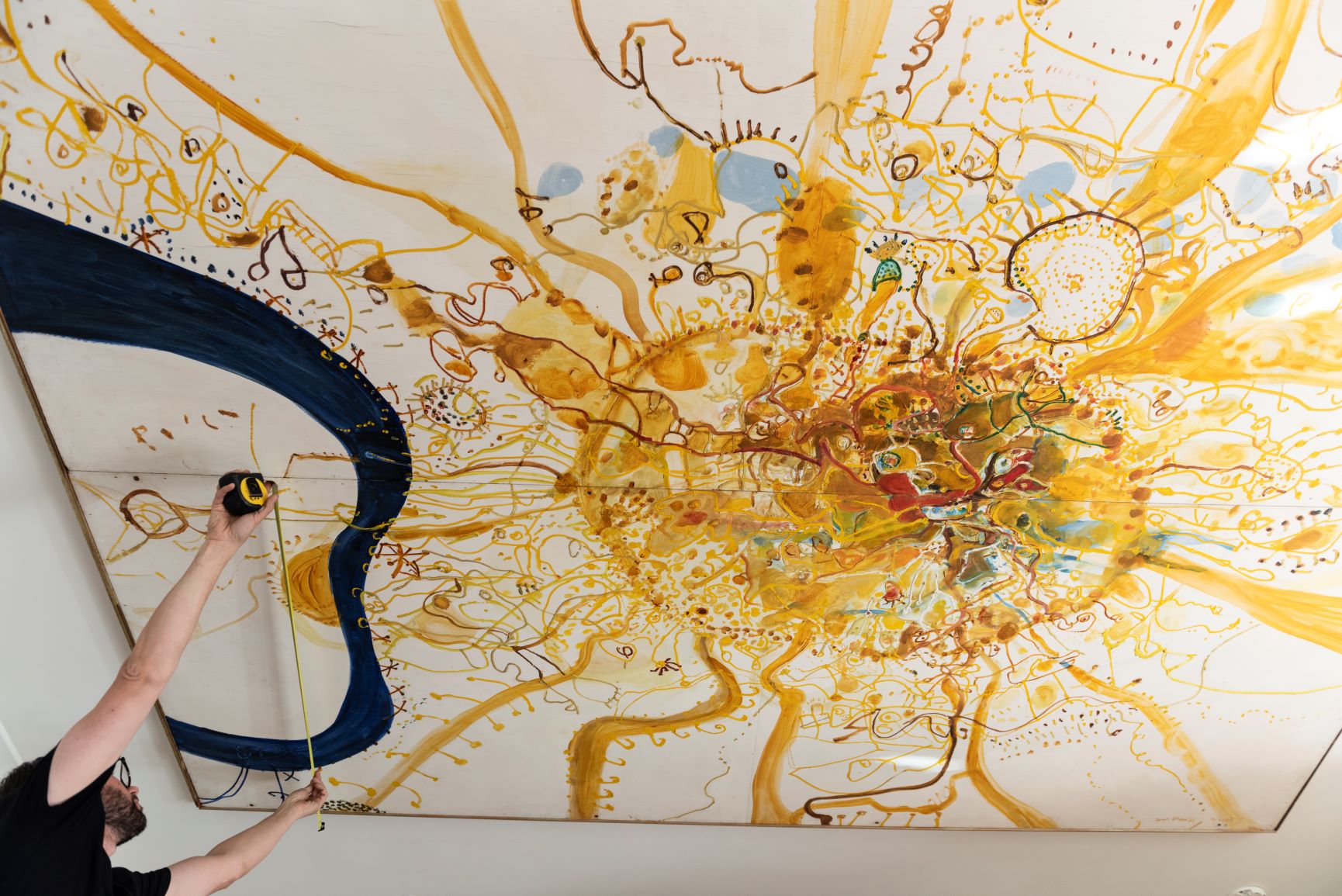 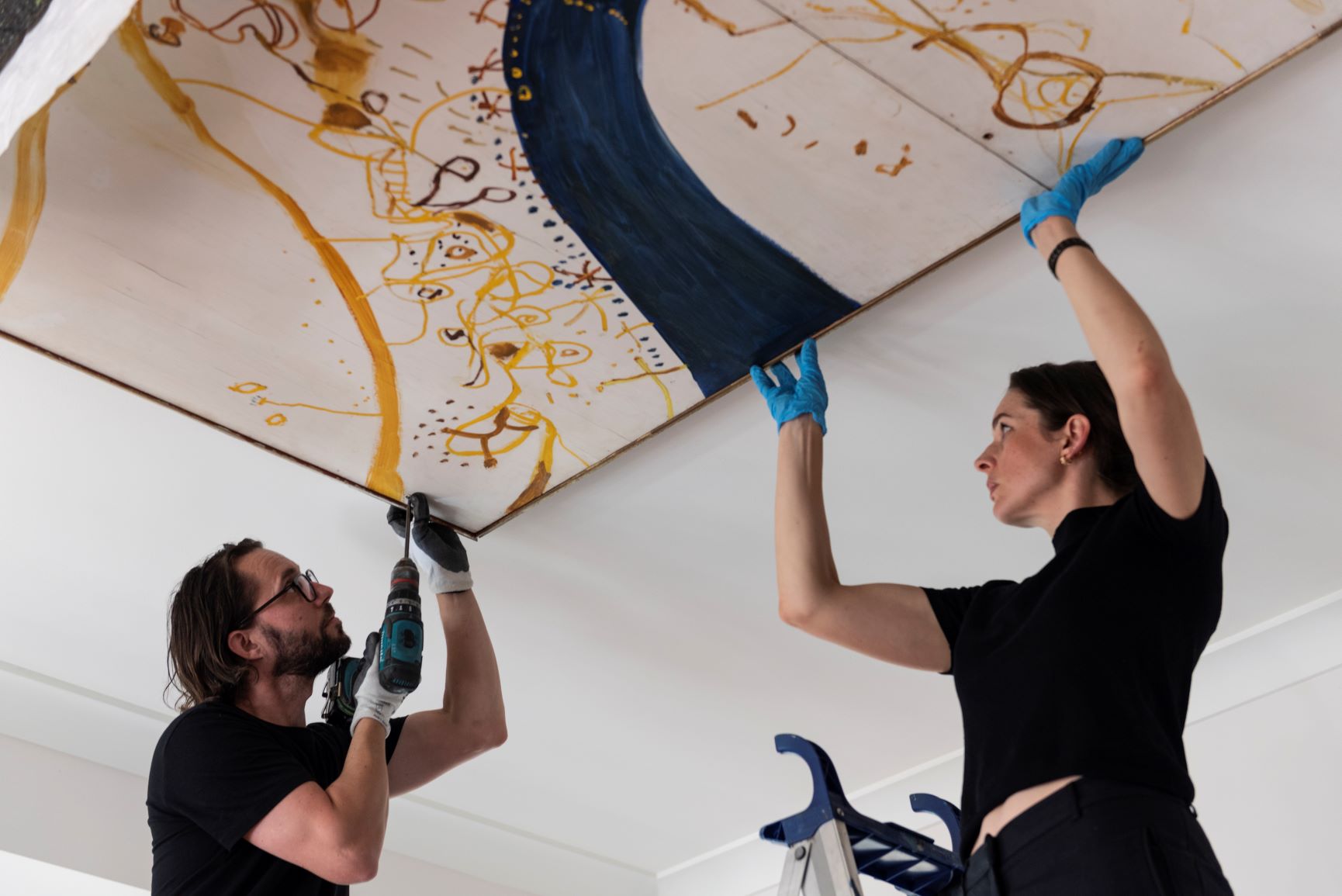 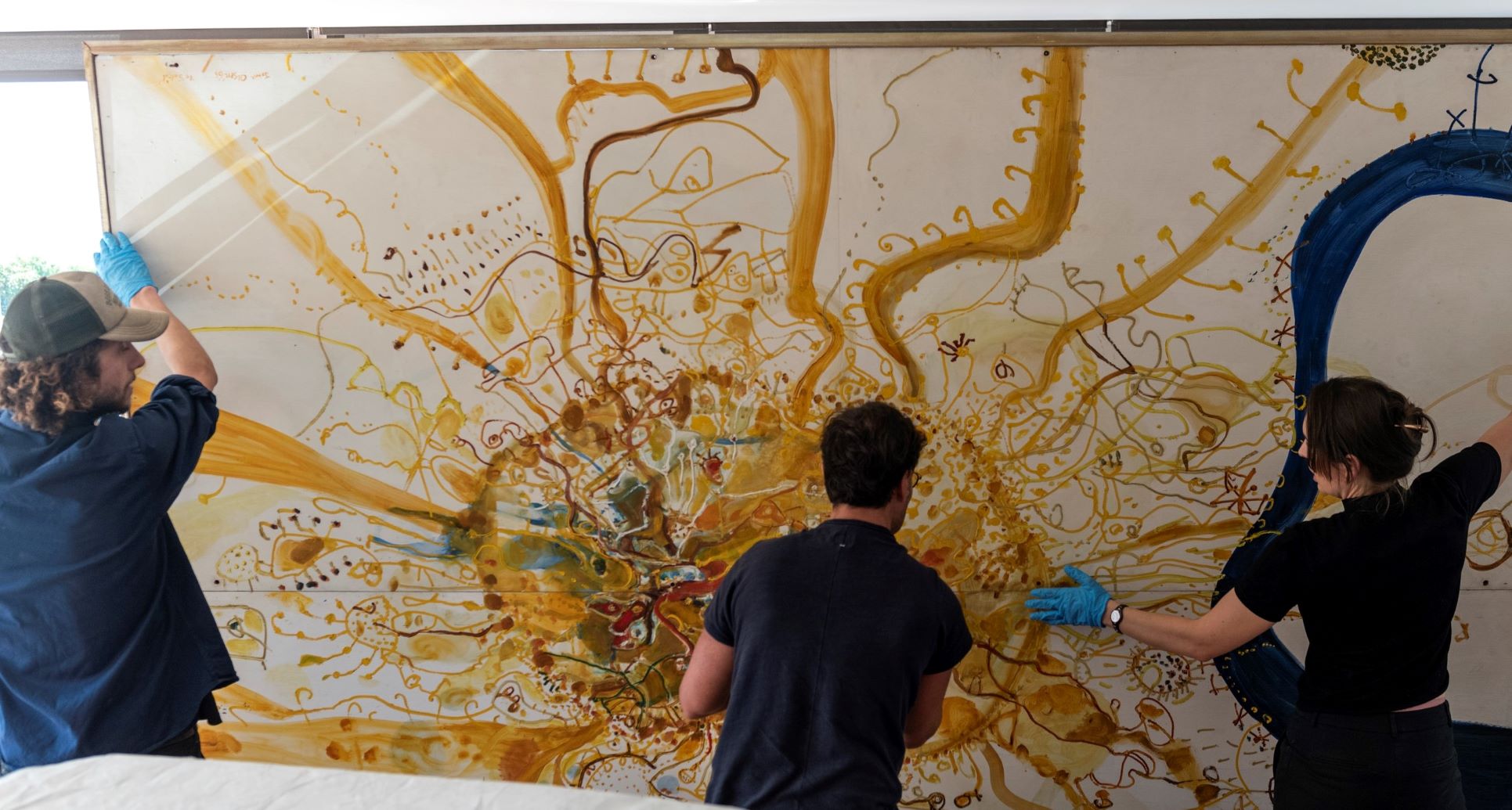 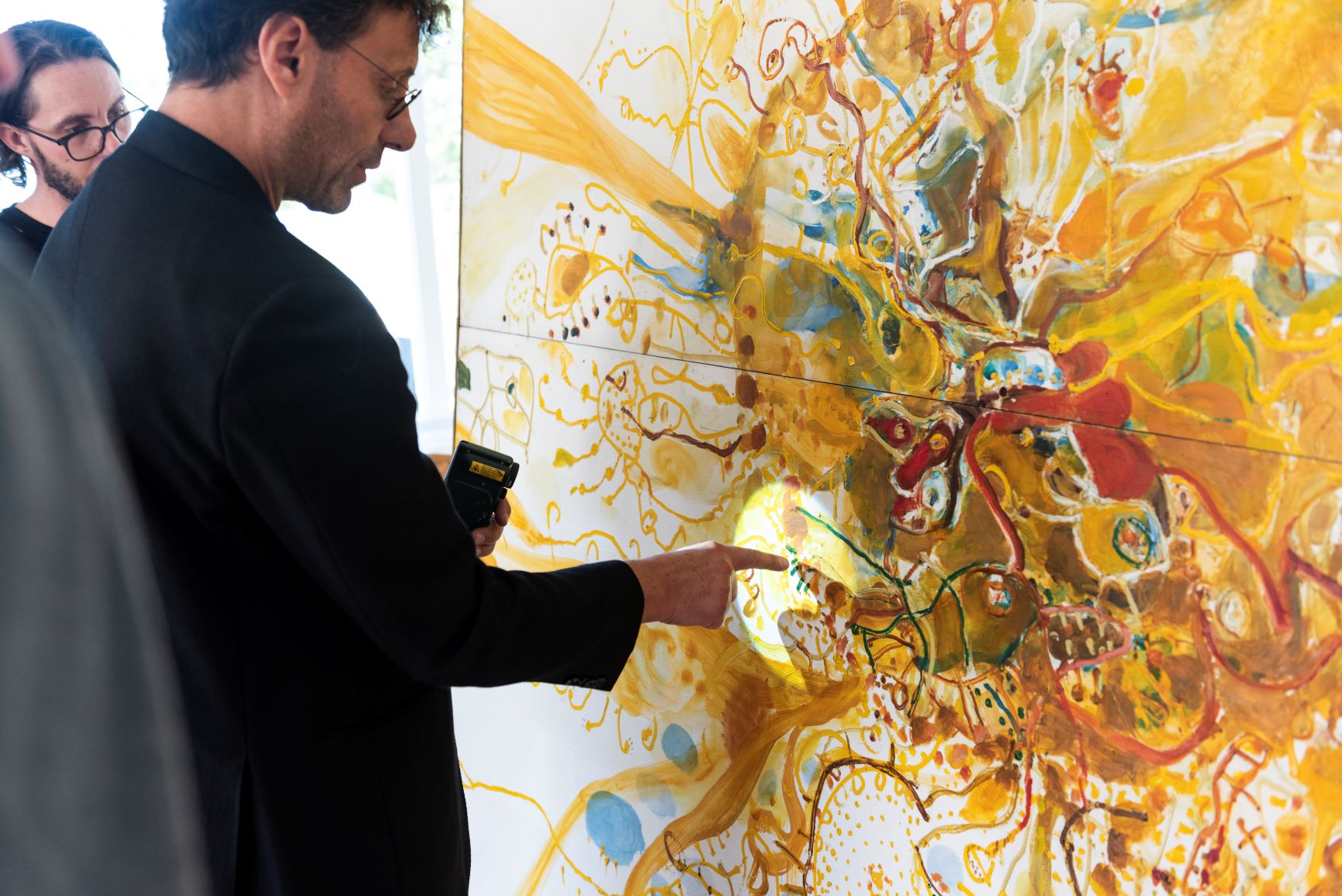 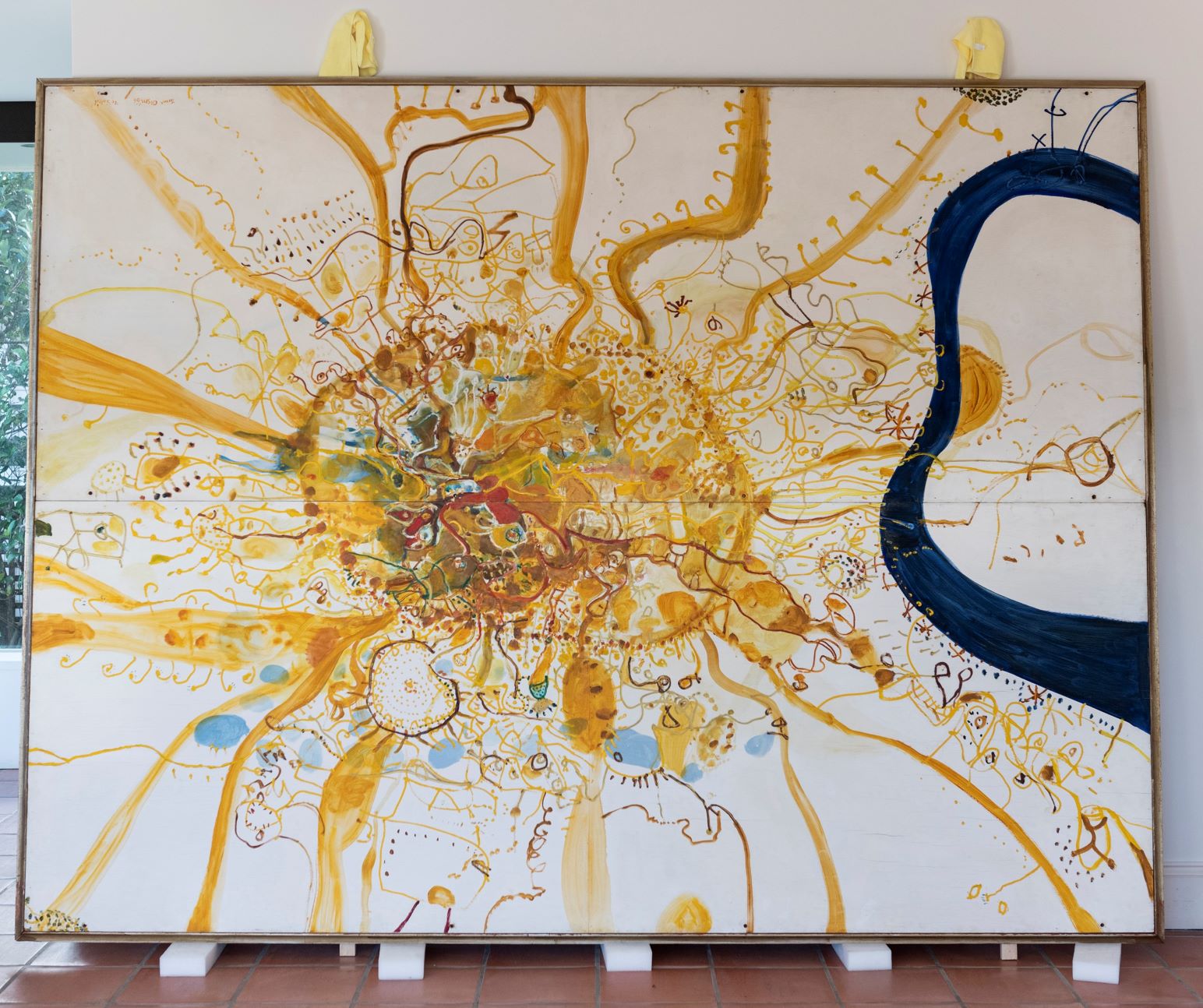 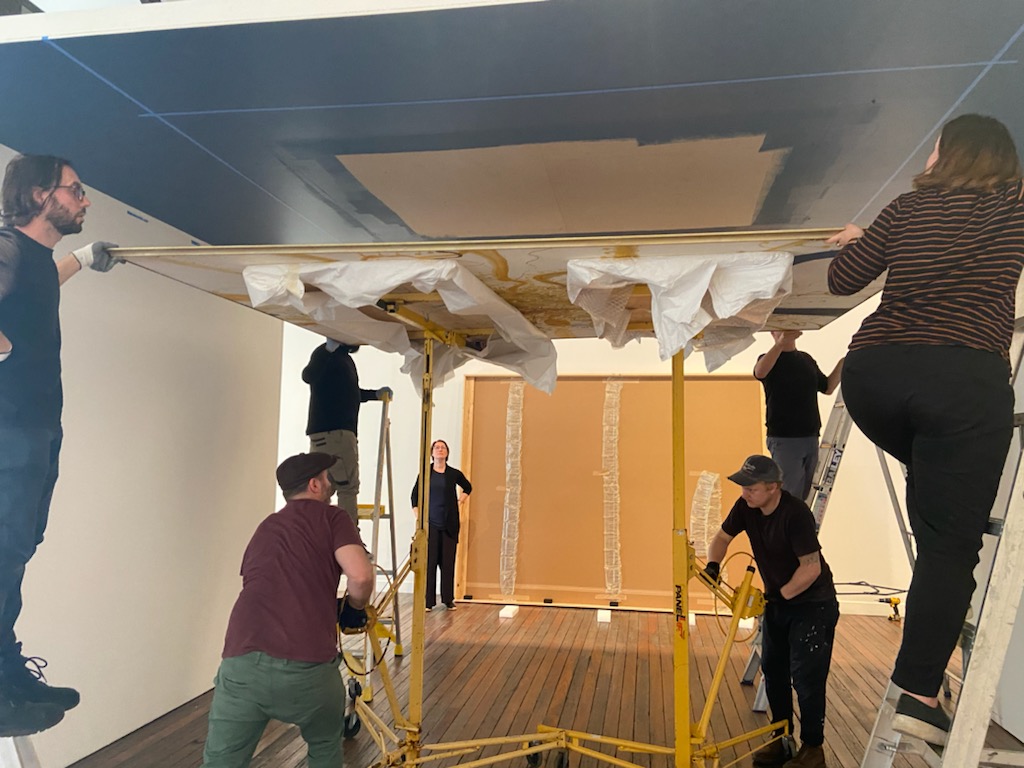 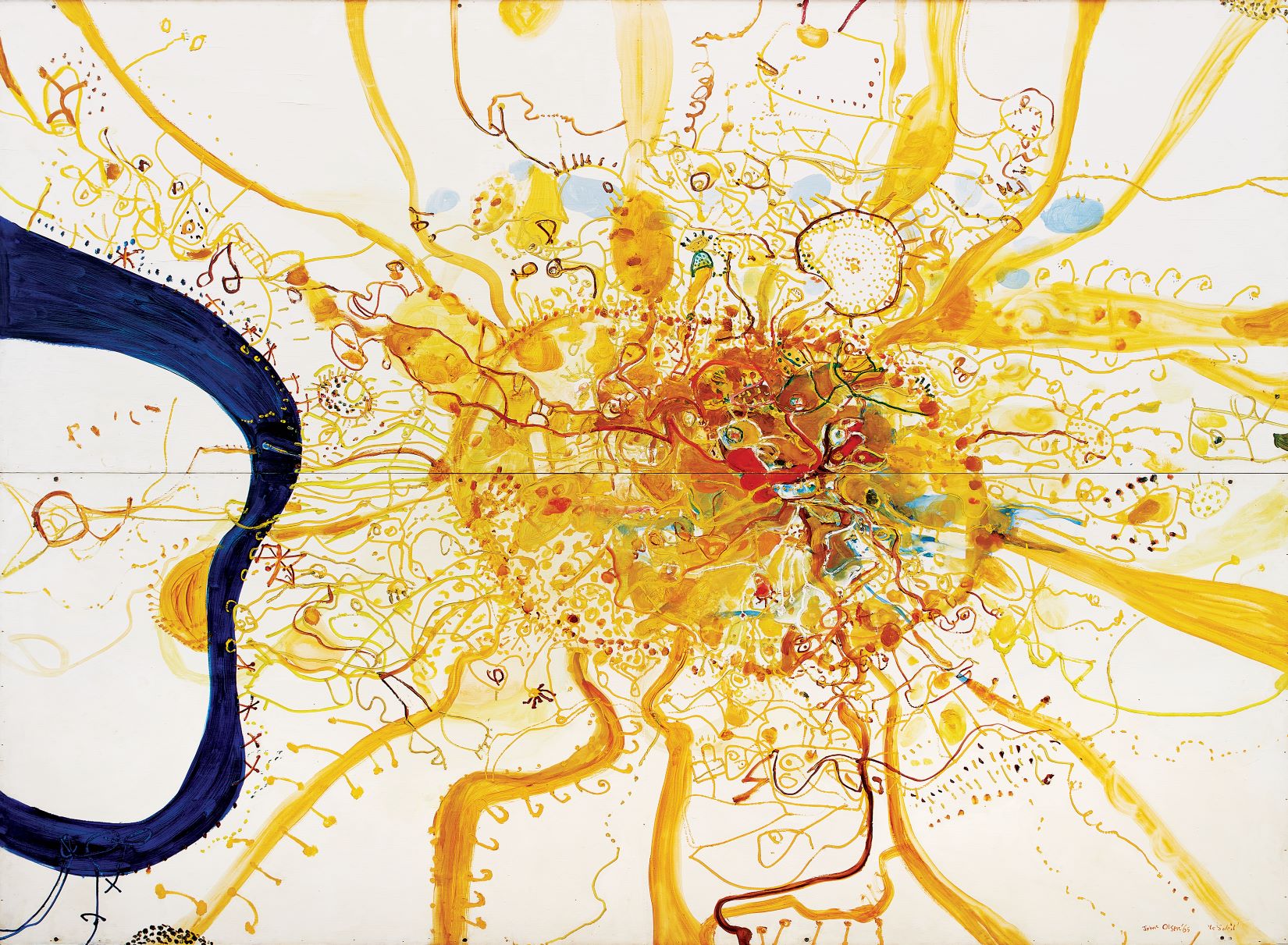 Bringing Le Soleil down to earth

Taking Le Soleil down from the ceiling where it had hung for so long was a significant operation. NAS Gallery technician Tim Andrew first went to the private house on May 5 to discover how the painting had been installed and figure out how best to get it down from the ceiling.

It was attached to a row of timber batons on the ceiling using screws along the edges of the two panels that make up the painting, which are held together by a narrow wooden frame. Two weeks later, Tim returned to the house with NAS exhibitions curator Olivia Sophia, art conservator David Stein, Mark Polak from the NAS facilities team, and Jack Wotton assisting. NAS photographer Peter Morgan was there to document the process.

It was established that there were extra brad nails (thinner than normal nails with a smaller head) through the wooden frame on that side of the painting. Once they were detached, the painting came down, lowered slowly on the panel lift and supported by a person on each side until it was low enough to be tipped up and rested on one side on the floor.

It was interesting to view the work from this new angle; it was a more immersive experience than viewed on the ceiling, and easier to appreciate all the fine detail up close, including the original handprint.

Le Soleil was left resting against a wall inside the house. An art transport company built a frame to move the work by truck to the National Art School, where it was lifted into the second floor of the NAS Gallery using a crane. It is now installed as a ceiling work on a blue background, as it was when it was originally installed in the family home. Traces of that blue background paint can still be seen on the frame; these were used to match the colour used for the John Olsen: Goya’s Dog exhibition.