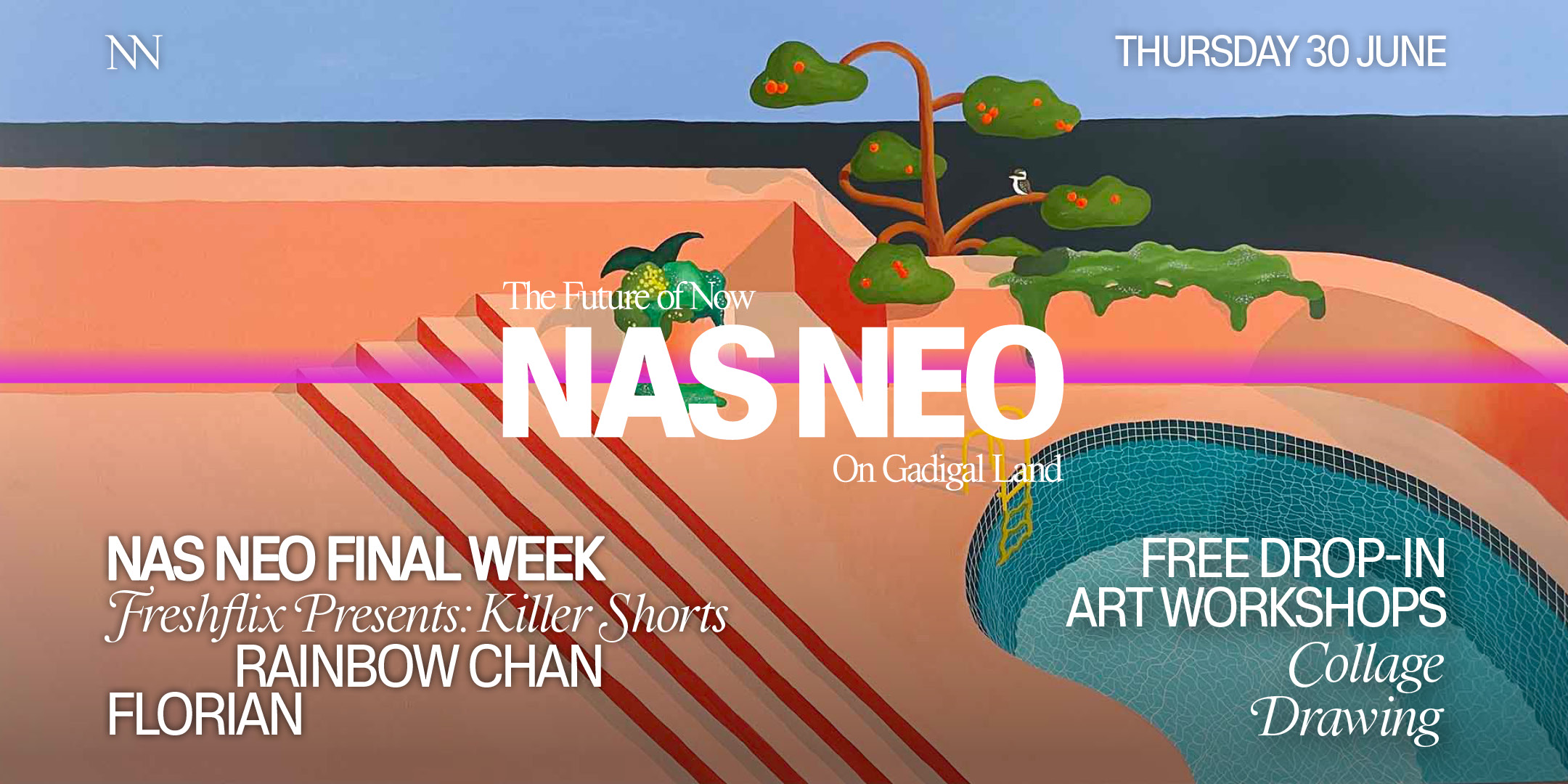 NAS NEO THE FUTURE OF

Join exhibition guest curator Sioux Garside in a floor talk exploring the exhibition Colin Lanceley: Earthly Delights. The floor talk will explore Colin Lanceley’s evolution as an artist, discuss the ideas implicit in his paintings and his legacy as one of the National Art School’s most important Alumni.

Attn All filmmakers, cultural and creative nerds and anyone interested in killer short films!

NAS NEO, a weekly after-hours event series at Darlinghurst’s National Art School is partnering with the indie film team from Freshflix to bring you an exclusive fun-filled inspiring night of kick-ass open-access industry schmooze session and killer short films from Australia and around the world. … AND….Are you sitting down? Here is the best part. It’s FREE!

It all kicks off on Thursday, June 23rd at 6pm at the National Art School Cell Block Theatre with the not-to-be-missed Gatekeepers Campfire session. 60mins of essential information what it takes to get your projects made and seen by the right people – straight from the mouths of the people who have the power to greenlight your projects. Executives from the funding agencies, streamers, broadcasters and production companies.

Following Gatekeeper Campfire session, at 715pm, will be a 45 minute screening of KILLER SHORTS that will have you jumping out of your seat one minute and ROFLing the next. Specially selected comedy short films and thriller/ horrors from around the world to get the blood pumping and the giggles going.

Freshflix is an Australian film festival that presents the crème de la crème of Aussie and international shorts whilst making an absolute red hot night of it! Now in its tenth season, previous years have been set atop frothing ocean cliffs, afloat in glittery Darling Harbour, at Hollywood’s iconic Raleigh studios and rooftop at the stunning MCA to celebrate and elevate what Freshflix is all about: cracking shorts and the legends who make them.

Rainbow Chan is a vocalist, producer and multidisciplinary artist who has built a reputation as one of the most innovative musicians in Australia. Driven by a DIY spirit, Chan melds catchy melodies and off-kilter beats made up of field-recordings and found sounds. Both heartbreaking and tender at once, her idiosyncratic brand of pop holds a mirror up to diasporic experiences, and also deeply personal tales of love and loss.

Chan has performed at renowned venues and festivals including Sydney Opera House, Vivid, MONA FOMA, Gallery of Modern Art, Melbourne Music Week, Iceland Airwaves, National Taiwan Museum of Fine Arts, and Tai Kwun (Hong Kong). Additionally, her multi-arts installations have been exhibited with Firstdraft Gallery, Liquid Architecture, 4A Centre for Contemporary Asian Art and I-Project Space, Beijing. In 2020, Chan was part of Artspace’s One Year Studio Program and was selected as the Performance Space x West Kowloon Exchange resident artist. “Songs from a Walled Village”, her documentary for ABC Radio National, was a finalist in the Asia-Pacific Broadcasting Union Awards 2021. Chan is a finalist in the 2021/22 NSW Visual Arts Emerging Fellowship (Artspace, CreateNSW and NAS).

With a flair for nuanced songwriting, Chan is signed to Gaga Music Publishing and has composed music for ABC documentary, “The Glass Bedroom” (2017), a live score for Art Gallery of NSW’s “Starburst”: Chinese Film Season (2018), the theme song for 7am’s “Everybody Knows” podcast, and an original soundtrack for short film “Butter” directed by Anita Lee (2022).

Delivering unapologetic pop that kickstarts your heart, and a live show that is guaranteed to blow your mind, Florian is a pop-star on her own terms. Fijian/Australian Florian blames her cross-genre songwriting on her Mum’s “eclectic musical taste”. Stepping onto the scene in 2017, Florian immediately turned heads with her vocal chops and catchy hooks. She gained respect from her peers immediately and the attention of Triple J’s Bridget Hustwaite and Dave Ruby Howe who have supported all of her releases. In 2018 her first single landed her a spot as a Vanda & Young finalist.