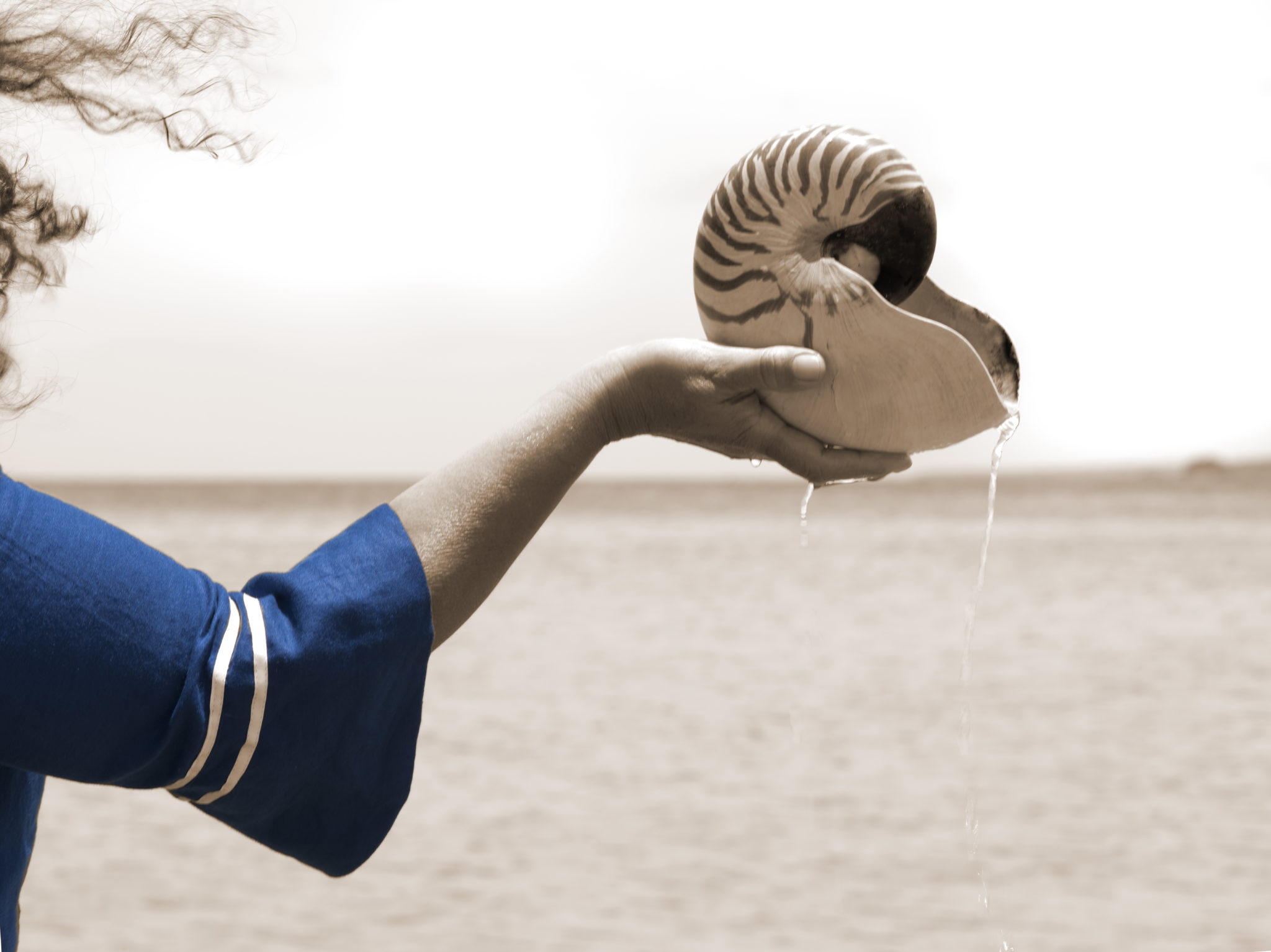 On January 8, 2020, Dr Fiona Foley’s survey exhibition Who are these strangers and where are they going? opens at the NAS Gallery. In October 2019, she took part in the National Art School’s symposium The Australian Object: Material Culture in Context. Her presentation spoke about the response of the Badtjala people on her country K’gari (Fraser Island) to their first sighting of Captain Cook’s ship, and her work with contemporary breast plates, which are part of the survey show that revisits 30 years of her art practice.

Clouds have played a central role in my recent research, writing and film, and they also feature in the opening of a strange encounter between Badtjala people and white men through verse.

“The ship rose out of the sea like cloud and it kept near land for three or four days. One day it came in very close at Takky Wooroo and they saw many men walking around on it. They asked each other, who are these strangers and where are they going?”

There are two versions of the song in existence. Badtjala culture is sophisticated and expressed itself with a number of metaphors. This remarkable event recorded in song is little known to the nation we now call Australia: the first preserved indigenous observation of the British incomers, handed down over generations as oral testimony.

The first line, “The ship rose up out of the sea like cloud,” recounts the billowing sails of the Endeavour, bobbing around out to sea. Our Badtjala gaze was watching them as they were watching us, which left two substantial threads of cultural interstices, the space between things or events. How did Badtjala people feel about this apparition? The song gives us a clue, they were curious and wanted to know more. Who are these strangers and where are they going?

The same cannot be said of the British. Inherent in the values of another race pursuing the Transit of Venus, the first British visitors, Bruce Pascoe writes, sailed to Australia contemplating what they were about to find. An innate superiority was the prism through which their new world was seen. Thus before the British even arrived in Australia, there were pre-existing principles upon which the people they encountered on arrival would be understood. Principles that subjugated them as inherently inferior.

With the Endeavour passing by this volcanic headland on the 20th of May, 1770, the sovereign Aboriginal gaze had been observing them for days and indeed weeks. These events are marked by British arrogance, to name sites that already had names. The Badtjala name for this place is Takky Wooroo. Cook went on to also name Sandy Cape and Breaksea Spit, and the space between things or events became an exercise in scientific racism.

The volcanic outcrop of rock, located on K’gari, is a key into colonial thinking about race and science. Encountering Aboriginal sovereign nations up and down the east coast of Australia, the British saw and remarked upon many Aboriginal clan groups and camp fires. The act of mapping, discovery and European possession unfolded with the Badtjala people at the very centre of this racialisation, unfolding in real time. As Jodi A. Byrd identifies in her publication, The Transit of Empire, global systems that secure white dominance through time, property and notions of self played out at Takky Wooroo.

More important, at the site of the first Aboriginals, Captain James Cook and Sir Joseph Banks were engaged in a discussion about their skin colour and hair texture to try and define this new race of humans. Not wanting to classify them as negroes, they referred to them as Indian at different stages, due to their hair not being like wool or woolly. The evidence is writ large and left behind by Cook for all to witness when he renamed the spot Indian Head. The rocky outcrop did not look like an Indian’s profile, but was named in observance of the Badtjala people amassed in number on top. It no longer retains its Badtjala name, with Queensland Parks and Wildlife Services signage to the entry points of the headland stamping their cultural dominance over this tract of land. Like so many stories about our island, they are nearly all shrouded in layers of silence.

Just like Cook’s well-versed racial hierarchical practices, naming is central to the transaction between object and the native receiver of breastplates. Usually personalised with a corresponding place name, a descriptor of the man or woman is often engraved into the brass. Jakelin Troy identifies an Aboriginal person wearing a georgette was certainly from the colonialists’ point of view considered to be a leader within the Aboriginal community. To bestow this object was to select “the leader” of an Aboriginal sovereign nation. Aboriginal people do not rule in the western sense but govern through consensus. Breast plates and their codification are problematic objects for this very reason.

The bestowing of leadership is still problematic in this country and has become the precursor of the Australian media to anoint our national Aboriginal leadership when it does not culturally exist.

A number of years ago I first encountered the performance by Dr Michael Mel from Papua New Guinea. I was made aware of racial naming and the act of ceremony at the National Museum of Australia. He had made a series of breastplates from cardboard and during his performance took them off one by one from around his neck and gave them to individuals who largely comprised a white audience. They were inscribed with an English word used to denigrate native people.

In this one performance, Dr Mel had shifted the racial dynamic and placed the emphasis back on the curious white interloper. It was a powerful exchange to name white people, for example, as dirty, savages and lazy. Not until recently have I come across five breastplates held in the Museum of Queensland collection from my traditional country. They were a part of the jigsaw I never thought to look for until mentioned by my cousin.

I have used breastplates in my own work, usually in photographic series and more recently a wall installation. I cannot definitely explain why I went in this direction but it has been a gradual process over many years. The first being made for the 2010 photographic series Bearing Witness, inscribed with the quote by Greek philosopher Sophocles. “Ignorant men don’t know what good they hold in their hands until they’ve flung it away.”

The quote for me represented Indigenous knowledge that had been lost through the rapid destruction of Aboriginal societies on the east coast of Australia by the colonialists. While doing my PhD research, I came across a number of phrases that stayed with me and ended up forming part of my exegesis exhibition.

My PhD was on a piece of legislation titles the Aboriginal Protection and Restriction of the Sale of Opium Act 1897. Up until that time opium was legal in the state of Queensland.  After the legislation was introduced, 33 clauses  were used by Archibald Meston to isolate Aboriginal people on Fraser Island in a mission to bring all the opium-affected Aboriginals to that part of Queensland to control their addiction. One of those other gems that I found was in relation to an 1851 massacre that had taken place over 11 days on Fraser Island and the lieutenant in charge of that particular massacre with the Native Mounted Police referred to Badtjala people on the island as “the charcoals of Fraser Island”. That was one little phrase I couldn’t let go of and had to use in a breastplate.

Horror has a Face is a body of work I created in 2017 as a part of my exegesis. This breastplate says Badtjala warrior, worn by Joe Gala a Badtjala man.

As time moves on I have become aware of other Aboriginal artists making breast plates like the community in Ballarat, Victoria. I personally invited members of the Pitcha Makin Fellas to exhibit their work alongside mine for the Ballarat International Foto Biennale.

Other people making breast plates are great surprises to me and I ended up buying one, which I didn’t know was made by a six-year-old boy. It’s inscribed as you can see, Black Spirit, and I think Black Spirit, that’s what makes us unique as black artists.

Who are these strangers and where are they going? is at the NAS Gallery from 9 January to 8 February, 2020, Monday–Saturday 11am–5pm, free, cnr Forbes and Burton Sts, Darlinghurst.