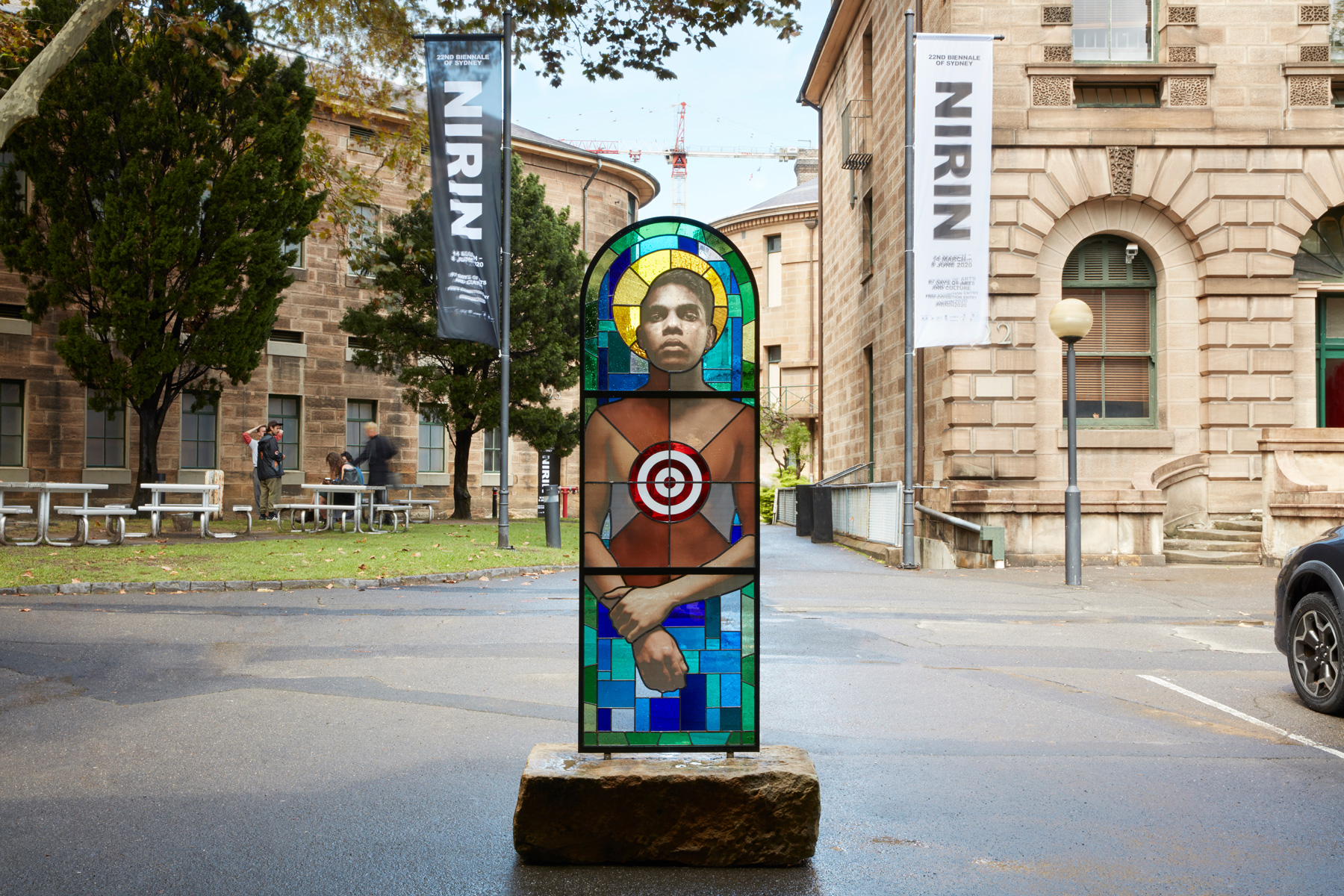 Artist Tony Albert talks about his new work Brothers (The Prodigal Son), 2020, for NIRIN at the National Art School.

Tony Albert’s latest work, Brothers (The Prodigal Son), premiered at the National Art School in March 2020 as part of NIRIN, Biennale of Sydney.

Tony says: “It came out of a recent residency at the Canberra Glassworks. On a site visit to the National Art School, I was struck by the beautiful stained-glass window in the central building, the historic Chapel, from 1873 showing the prodigal son. I wanted to recreate this image for the Biennale in leadlight.

“The Brothers images allude to the holy trinity – strong yet powerful, bathed in light, yet still innocent and vulnerable. I wanted to immortalise our people who are all too often written out of history.”

The 2013 Brothers series was originally inspired by a group of boys at a protest rally who’d taken off their shirts to reveal targets drawn on their bodies, a response to the shooting and wounding of two Aboriginal teenagers, aged 14 and 17, by police in Sydney’s Kings Cross.

Albert was inspired by this act of political defiance – as a tribute to those boys, he decided to photograph portraits of indigenous young men with red targets painted on their bare chests.

How did this new work Brothers (The Prodigal Son) come about?

When I was originally doing site visits to NAS for the Biennale, I was investigating what would work there and making a work attached to the history of the old Darlinghurst Gaol. I was attracted by the Chapel’s religious iconography, the way it was used for both men and women prisoners, and its visibility. I have an attachment to the church, I have collected religious iconography since I was a kid, and I always wanted the Brothers series to be recreated as icons, the gaze of those young men, looking at them in a completely different light to how they are seen politically.

Have you worked with glass before?

Never. It has all been very serendipitous because the Glassworks residency had been in the pipeline for well over a year and I kept having to push the date back. I think when things happen they happen for a reason – it all lead to the stained glass window at NAS and the potential of reproducing one of these beautiful images.

How long did it take?

I was at Canberra Glassworks last year from November for six weeks and finished up just before Christmas. The director Aimee Frodsham was offering an amazing opportunity for contemporary artists to come and work in glass, and get rid of the stigma sometimes attached to glass as a craft. I was really invited to just play, and on researching and looking at what could be done with glass, I thought it would be a great opportunity to hopefully get some work done for the Biennale.

Is stained glass still seen as an art from the past, connected to churches and cathedrals?

Yes, you’re looking at a form of visual entertainment from before TV, and the only places that could afford to do that were churches and for royalty, so stained glass in itself has always been promoted in the psyche as something of grandeur. I think that’s why we respond to it in that way, it still sits as a very impressive, very precious way of working.

What did you do at the Glassworks residency?

I was working with amazing technicians and learning the whole time. I was actually physically cutting glass, looking at the different colours and how they worked together, it was a much more intense project than I ever imagined.

It’s all vintage glass, so the fragility of working with it, I was working with technicians of years and years of training and I was a novice and it’s like anything at that level, it’s just a very hard medium to work with. When you do inductions with safety goggles and gloves and enclosed shoes, it’s not a regular space like for me at the studio, where I’m shoeless and meandering around, it’s highly disciplined.

Do you put pressure on yourself in this kind of situation?

I feel privileged just to be working as an artist, but you have to be very disciplined. I really believe artists work as hard if not harder than any other profession, but it’s definitely not seen like that. It’s taken a long time for my family to understand I don’t just drink all day! So we’ve got to change those perceptions and I like to lead by example, that’s why I put a lot of pressure on myself to make sure people know and understand how hard we work.

Did you achieve what you wanted to at the Glassworks?

I wanted to do all three boys but knew that was probably going to be impossible. I got one done and maybe that’s a future dream to complete the set.

Is this work an extension of your Visible show at QAGOMA in 2018?

It always extends, and that tension between the visible and invisible is really important to my work. Glass is transparent and fragile but super-strong, there are all these beautiful tangents attached to glass.

Due to regulations for the National Art School as a tertiary institution, the campus remains closed to the general public. Tony’s glasswork, and other Biennale artworks commissioned for NIRIN and first exhibited at NAS in March, have been transferred to Carriageworks at Eveleigh, where they can be seen from 7 August to 26 September, 2020.

Tony Albert explores contemporary legacies of colonialism across different mediums, from object-based assemblages to painting, photography, video, installation and now stained glass. His practice is concerned with identity and the ascribing of social labels; unpacking what it means to judge and be judged in the absence of recognition or understanding.

He plays with the tension arising from the visibility, and in turn the invisibility, of Aboriginal People across the news media, literature, and the visual world.

His projects have most recently included  a monumental installation for Art Basel Hong Kong Encounters; a large-scale sculpture commissioned by Carriageworks for The National 2019: New Australian Art; The City of Milan-PAC’s invitation exhibition Australia: A Journey Down Under; and his first major institutional solo exhibition, Visible, a survey of his career and diverse practice at Queensland Art Gallery | Gallery of Modern Art in Brisbane.