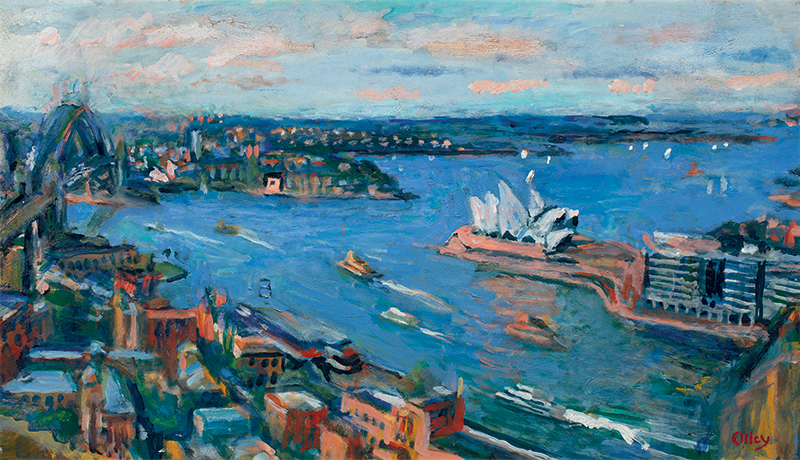 National Art School in the NSW Landscape is a new exhibition at NSW Parliament House from 9 – 31 March 2022. It explores the relationship between people, land and culture across the state through artworks by 21 significant Australian artists who studied at the National Art School (NAS), which this year celebrates 100 years since moving into the former Darlinghurst Gaol site in inner-city Sydney. Together these works highlight the importance of artistic expression to inform our understanding of the environment in different regions, from the rural experience to urban living.

Featuring 27 major artworks in various media including tapestry, collage and ceramics, this show represents the enormous diversity of NSW’s landscape, environment and culture. The works encompass urban, rural, coastal, desert and mountainous locations, from Lake Mungo by Elizabeth Cummings to John Olsen’s Bathurst Butter and Sydney Harbour from the Rocks by Margaret Olley.

NAS Director and CEO Steven Alderton says, “This exhibition reflects the extraordinary diversity of practices and sensibilities among NAS alumni, who have in turn shaped Australia’s contemporary art landscape for generations. We are proud to be presenting their work at Parliament House, sharing their personal visions of NSW.”

The exhibition is hosted at NSW Parliament by the Honourable Don Harwin, member of the NSW Legislative Council. “As the leading fine art school in the country, NAS has produced many distinguished and talented alumni. This exhibition celebrates the state’s rich visual arts landscape and how it has shaped who we are today,” Mr Harwin said. “National Art School in the NSW Landscape – now on display in the Fountain Court – is an instalment of Parliament’s monthly exhibition program and is open to the public to enjoy.”

NAS is the longest-running independent art school in Australia, located in the NSW State heritage-listed former Darlinghurst Gaol site. Its intensive studio-based model of art education has produced successive generations of Australia’s leading artists, shaping the cultural identity of NSW. In 2022, NAS marks a significant double century – 100 years since moving to the Darlinghurst Gaol site in 1922, and 200 years since building began on the gaol in 1822. To celebrate the centenary year, an extensive program featuring School’s alumni is underway, including this exhibition.