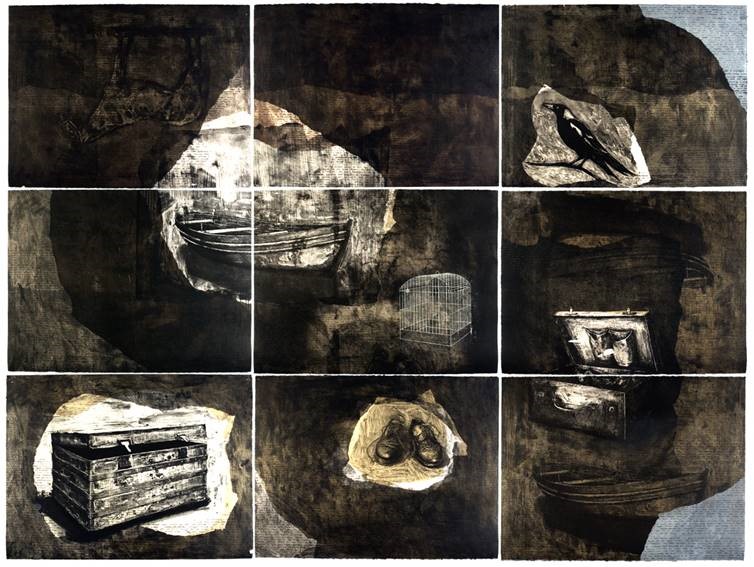 In 2001, Simon Cooper left his hometown of Melbourne to join the National Art School as Head of Printmaking. At the time, he thought he’d stay a few years, until his kids were old enough to go to school, then the family would head back south.

Not quite. After teaching at NAS for seven years, Cooper became Head of Studies in 2008. He is responsible for the development and delivery of the school’s academic program, including the BFA, MFA and more recently introduced DFA.

Until recently he also oversaw NAS’s short courses public program and helped established the education outreach program to directly engage with high schools. “To me there’s a very direct connection to the schools and teachers and our own degree program. I see it all as part of one big ecology rather than silos.”

Simon has been a practising artist and teacher since graduating in printmaking from Prahran College, followed by post-graduate studies at the Victorian College of the Arts. He has exhibited in Australia and overseas, with work held in collections including the Art Gallery of NSW, the National Gallery of Australia in Canberra, and the Seoul Metropolitan Museum of Art in South Korea.

What did art school give you?

A sense of purpose. I didn’t realise what an artist was. I started a diploma in design thinking I needed a job, then I started to take these art subjects and slowly realised that was what was making me happy. I was offered a job as a ticket writer at Myer, and the idea of a job was tempting, but they showed me the room where you sit and write the tickets and part of me thought “I don’t think there’s much of a future in this”. And of course, that job was redundant in a couple of years!

Art school also gave me a view of the world. I was a suburban working-class kid of migrant parents who had very little knowledge of the world outside my suburban environment, so it was about worldliness. I got to see how big it was.

Has the attitude to attending art school changed?

No, I still see something very similar, people on a quest for greater understanding of themselves and the world. They want the kind of engagement that is unique to art practice. The same kinds of people still go to art school, you have to be curious.

And the concerns about coming to art school?

I don’t think they’ve changed much either. In my role here I do a lot of talking to people who are thinking about going to art school and I encourage them to disabuse themselves of conventional ideas of what ‘success’ looks like. Because out there in the world, artists build practice into their lives in meaningful and viable ways without having a solo show once a year and winning big art prizes. That is a kind of practice, a highly visible one, and we’re proud of the people who achieve that, but there are many other paths for people who combine their practice with other professional pursuits and careers. People are building these things into all sorts of interesting portfolio careers – that’s not failure, it’s just another kind of success.

There are risks around the gig economy that artists can be quite vulnerable in, even more so as we have seen with Covid19 this year, but at the same time there are enormous freedoms. I have also seen since my time at art school big shifts in the way artists get their work into the world. What was once a very vertical market structure of artists and galleries has gone lateral, with the rise of artist-run initiatives, and the different kinds of relationships artists have with clients, collectors, dealers and galleries.

How do you see NAS’s role?

Anyone who comes to art school, it’s because they want to be an artist. Someone enrols in a BFA, that’s a huge commitment, there’s nothing slight about it at any age. Sometimes mature age students feel it more keenly because their responsibilities feel bigger but at the same time a young school leaver is making a big decision too. I’m always humbled by that and you feel an obligation to support them in the best way you can towards that goal, to help people find their ‘metier’ and become the artist they want to be, then they can take that wherever they want to.

How does NAS do that?

I’ve been on a lot of art school campuses, and here there’s always a sense of activity here – any day of the week there’s people doing things and an extraordinary vibe. You’ve got to get in there and make work otherwise those muscles just don’t develop. And doing something a lot, that’s when you get to this saturation point where you’re able to work with materials in a much more fluid way, and at some point an artwork starts to dictate its own terms and you’re in this interesting space. You see it happen.

The best art school experience is based on that, which is why the model we have here is still valuable. That high level of teaching and student contact hours and people in studios doing stuff creates an incredible energy, and the students tend to push each other along in that process. Some of those students will form important bonds, they’ll be friends for the rest of their life.

Whatever the circumstances, the kind of space we try and create at NAS is not based around a sentimental idea of an artist, it’s a reality. You’re learning through working with those materials and practice, and you establish another kind of thinking, another kind of expression of thought, and that’s what art is, ultimately.

I think the world relies upon artists who continue to provide this kind of strange speculation, this speculative space that can be a bit wondrous or extraordinary or challenging.

If we accept that challenge of someone wanting to become an artist and support them as best we can, with that comes a commitment to be honest as well and that’s not always an easy thing. I don’t mean being brutal, but it takes an incredible emotional investment, you have to accept that responsibility in your teaching at this level.

It’s not just about teaching students the technical abilities to create art, it’s that deeper question of why and where you’re going to take it. I still get a real kick out of the graduate shows where you see those outcomes, you see people’s incredible development in that short space of time. There’s an amazing acceleration when you see the penny drop and they get it and just go for it.

How has the pandemic affected the school?

This year has been a huge challenge for staff and students due to Coronavirus. When the NAS campus closed to students during lockdown in March, our task was to rapidly reconfigure the school’s academic program to allow students to continue their courses with the minimum of disruption. Our teachers were able to revise their lessons to deliver them online, and develop new projects for students to work on at home. We also launched the NAS Connect program to keep students engaged and sharing their creativity. Students and staff were able to start returning to campus in May, and many of the changes from this time will benefit the school and its students in the longterm, after all the Covid19 restrictions have lifted.

As a student, why did you choose printmaking as your practice?

I always liked drawing, that was my thing, and I liked the alchemy and chemistry and materiality of printmaking. I learnt everything in the broad scope of processes and materials, but printmaking was the thing I had an affinity for.

Why is printmaking a less familiar art form?

It was often regarded as a second-tier activity that served to reproduce things. In a culture that was all about originality, it didn’t seem to have that importance and gravitas.

But once you get involved with it you start to see beyond that superficial attitude. Printmaking as a medium has all these other connections to the history of art and culture, it’s closer to things like books for example, so this activity has a different kind of agency to the world, it’s really rich but not just about high art, about a much broader part of society and development.

There’s also a great connection to other traditions outside Europe, for instance in eastern art, so you connect with other cultural traditions like Japanese woodblock. These are the things that got me interested and excited as a student.

Was the second-tier status frustrating?

As a younger artist I used to worry about that stuff but I don’t worry about it anymore because in the long haul it doesn’t matter. As a recent graduate I was employed as custom printer with the Australian Print Workshop in Melbourne where I got to work with artists like Andy Goldsworthy, Hossein Valamanesh, Judy Watson, Tim Maguire and John Wolseley – the list goes on. It was like another kind of education because you’re inside someone’s practice, they can’t really keep any secrets from you when you work so closely, and you see why they’ve been so successful. It’s not just about their tenacity or good luck, it’s having a really well-grounded sense of their own identity that gives them confidence. They’re not worried about those hierarchies, they’re just interested in processes and materials that will help satisfy their curiosity.

Did you ever doubt your choice?

When I went to art school in the late ’80s, it was the dawn of post-modernity in visual art culture and every convention was under scrutiny. At times art making could feel like a quaint or even redundant activity. It took some metal to hold on through those shifting sands but then printmaking revealed itself to have this other dimension, about materiality and transference, and its rise in the countercultural space, like the screen printing in the Paper Tigers exhibition at the NAS Gallery in 2019. You realised these trajectories exist whether you call it art or not.