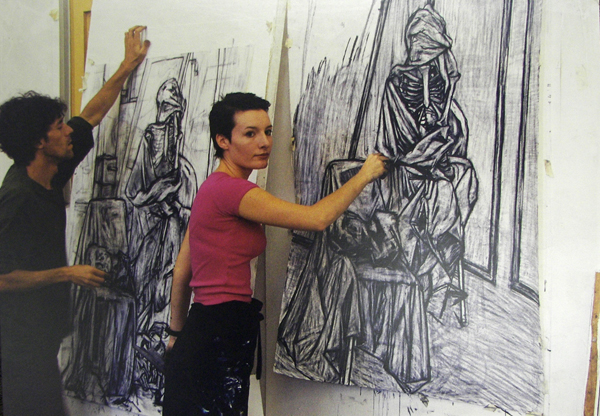 In the last week of February, three hundred and fifty students will return from the Summer break to commence the next stage of their studies at the National Art School. They will be hungry for the stimulation and rigour of the BFA program, but before they divide off for their timetabled classes they will participate in Margaret Olley Drawing Week. In this special week, just before Week One of the academic year, there are no AM and PM sessions and no shifts between subjects: just full immersion in drawing, a discipline that is at the core of all study at the School.

The tradition of Drawing Week began in 1999, when Noel Thurgate and Michael Downs were newly-appointed heads of the NAS Drawing Department. Their application for the job had included a simple idea, inspired by the New York Studio School’s Drawing Marathons. By enabling students to develop their drawings over a longer, more continuous spell of time than regular classes allowed for, they could be encouraged to make, unmake and remake their work. This would improve the quality of their drawings and perhaps more significantly, students would experience a new depth in their own potential as makers.

With only half of January and a sliver of February to turn this proposal into reality, Thurgate and Downs marshalled their colleagues and were ready on the 15th February to commence the inaugural Drawing Week, across two locations: the teaching studios of NAS’s Darlinghurst campus, and a vast, disused customs shed at Darling Harbour. The event was a huge success, both educationally and for the culture of the School. As the report on the first Drawing Week noted: “an ad hoc lunchtime forum developed where all the staff sat in a semi-circle with the participating students and talked about anything from Aristotle to discount art materials.”

This success aside, nobody could have foreseen that over the next two decades, thousands of National Art School students would participate in Drawing Week. Through a period when the tertiary sector has been subjected to one cutback after another, Drawing Week has thrived, with the generous support of the Margaret Olley Trust in recent years. Still, economy of means is paramount, and Drawing Week has often occupied urban sites in transition, from an abandoned theme park (Sega World at Darling Harbour, 2001) to a decommissioned power station (White Bay, 2005) and a gutted skyscraper in the Sydney CBD (60 Margaret Street, 2016). As an extra-curricular activity it can incorporate areas of study that sit on the fringe of the core Drawing program, with specialist artist-lecturers brought in to offer their experience in a particular area of drawing, or its intersection with other forms such as performance art, animation or photography.

In 2019, fifteen different workshops have been offered to students. They will head to locations including the State Library of New South Wales, the Hill End historical precinct and Cronulla Sewerage Treatment Plant. Befitting the anniversary Noel Thurgate will be back, leading a group who have elected to make drawings of the industrial harbour environment at Cockatoo Island. As he and Downs wrote in 1999, students can expect “a flying start to their work, in whatever area they are enrolled.”