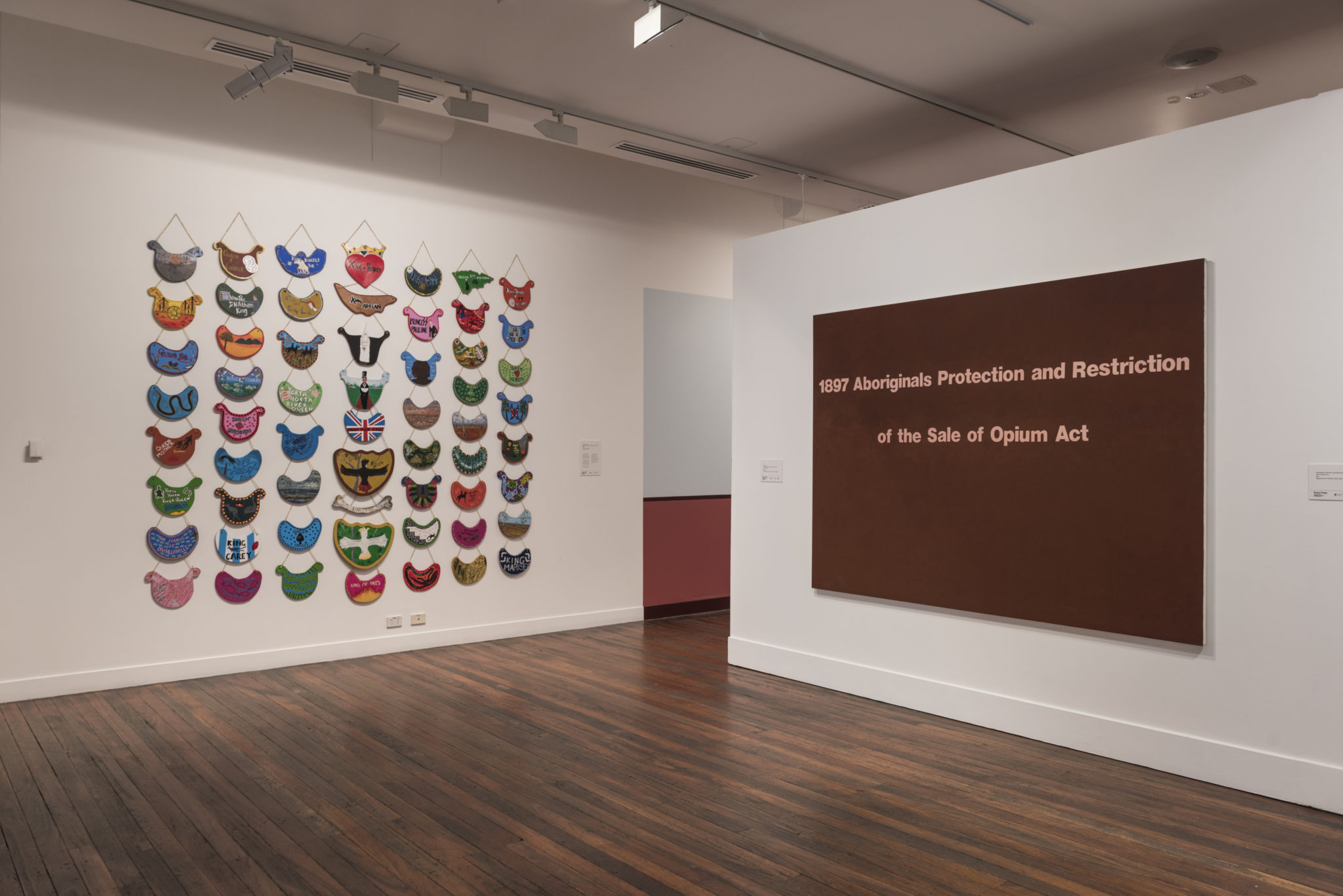 Artist Fiona Foley talks to curator Djon Mundine in the NAS Gallery for the exhibition Who are these strangers and where are they going?

Steven Alderton, NAS Director: Fiona Foley is one of our NAS graduates and one of our fellows, we treasure her. We have heard lots of stories from Fiona and other students about when she was here, so it’s really good to come full circle with a 30-year survey here in this gallery.

Djon Mundine: It’s a curious case to come back here in many ways, because Fiona studied here in the early 80s.

Fiona Foley: I was here in 82-83. The first year we were at Randwick, for the foundation year where we had the opportunity to do different subjects like photography, drawing and sculpture. In second year we were allowed to come here to the big school, we felt like young adults and important young art students.

I majored in two areas, printmaking and sculpture, and one of my sculpture teachers is here tonight, halfway up the back, his name is Bruce McCalmont. I have very fond memories of sculpture with Bruce and also one of my drawing teachers Geoffrey de Groen. Drawing here was mandatory, I was hopeless, but he used to make us draw seed pods and shells. It was a large sheet of paper and you were only allowed lead pencils and a rubber. The class was three hours each week and we had to work on the one drawing for anything from nine to twelve hours, which really made you examine that small object, to blow it up really large. So it was very disciplined training here, which I appreciated.

Djon: When you reach a certain phase in your life and career when people give you a retrospective, it’s not just about you but about you and your audience, you and your society. We have some really early work in the exhibition, it was at a time of consciousness, where you saw your own Aboriginal history, your Badtjala history, in broader context in this research you did on the Fraser Island woman.

Fiona: One of those really poignant moments happened when I was here at NAS in the print making department. I loved etching as a process and gravitated towards that. I had this real epiphany when I peeled back the paper from the zinc plate, it was an artwork I had etched into the plate, but they were Aboriginal images from elsewhere in Australia, let’s say the Northern Territory. When I looked at that etching I thought, I don’t have any relationship with this particular iconography, and it really made me think about my own Badtjala culture and my mother’s input. I remember we had conversations at home, about the fact my cultural artefacts are very scarce and scattered across Australian Museum collections, because of what took place in the Wide Bay region.

It made me look at the visual language that was on our material culture, shields that were in collections or other artefacts like shell necklaces, and to be much more specific about using Badtjala culture, even though it was like a jigsaw puzzle of piecing these fragments together over a long period of time. I think the legacy for me is the next generations of Badtjala artists can look back and say she worked with those particular shell necklaces from the South Australian Museum. So I started to put this new visual language into our common reading of the world that had been hidden away in collections.

Djon: When did you first see this image?

Fiona: The photograph to my left was taken in 1899. My mother did a lot of research, her name is Shirley Foley. She was also delving into the archives looking at photographs, and was very passionate about our Badtjala language and looking at early historians and putting word lists together. She did 20 years of research on our language and desktop published her Badtjala dictionary in 1996. This year I had an opportunity to work with mum’s dictionary again – 2019 was the Year of Indigenous Languages, so I applied for a grant and part of it was to republish mum’s dictionary that had been out of print for 23 years. So I republished the book and invited Teila Watson, who sang last night at the exhibition opening and also appears in the film, to use my mother’s dictionary and create a song in our Badtjala language.

I find the song incredibly moving, and I know a number of people last night were moved to tears, it’s a natural response to hearing this language sung. Why it’s important to have that song recreated is there is an existing English verse that is in some scarce publications. The first line of that song is, the ship rose out of the sea like cloud, and that’s the name for the film.

It’s also the first point of racialistion in Australia. What I mean by that is when Cook and Joseph Banks were having conversations on the Endeavour, when they came to Sydney and travelled up the east coast they saw many Aboriginal camp fires burning, and they were discussing this new race of people and wanted to name them. They were unsure, whether they negroes or were they Indians? Some of that conversation, which is in my PhD, is they were discussing things like their skin colour and their hair texture, and they were wondering, is their hair woolly, or is it lank? And they decided it was lank.

That point of racialisation was ongoing when Cook named a volcanic outcrop of rock. On top was a large group of Badtjala people so he named it Indian Head. I say the first point of racialisation in this country is in my country. Cook and the crew of the Endeavour were observing the Badtjala people, and they in return were observing this encounter on the 20th of May 1770, so Badtjala people created a song about that vessel going past our country. Cook went on to name two more sites in Badtjala country, and this is one of those hidden histories in this country that the general populace is unaware of because we’re not taught this history in our schools or universities.

I have read a lot, I started collecting books when I was 24, I wanted to know a lot more than what was being taught at university. So I’m largely self-taught about this history in Australia with Aboriginal people, and particularly in Queensland, there’s this whole trail of complexity in race relations that doesn’t get discussed in the way I’d like to talk about it.

Image: Fiona Foley, Who are these strangers and where are they going? installation view, 2020. Photo: Peter Morgan